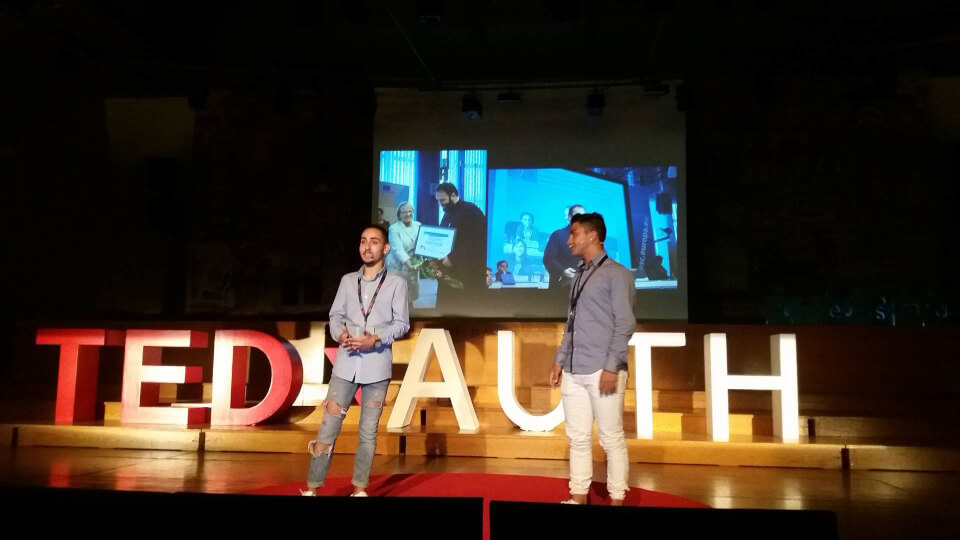 Stavros Giouvanis and Spyros Bakas Do Romani (colloquially known as Gypsies or Roma) learn robotics? But how? They do not even go to school! Stavros and Spyros, 2 of the children of Faros tell us about the history of Faros and how the knowledge broke down their ghettos in their Dendropotamos.

Spyros Bakas was born and raised in a Roma family, at Dendropotamos, Thessaloniki. Since the beginning of the local organization “Faros tou Kosmou”, Spyros was one of its main supporters and participants. This initiative is something which he defends with extreme determination and love. In “Faros tou Kosmou” he started as a member of the Robotic Competition team and later became its coach. One of the greatest achievements of the group was the distinction in the FIRST LEGO LEAGUE 2016 in Pan-Hellenic Educational Robotics Competition, where they managed to win the first prize in the “Project” category, on the main “RESEARCH” category. In fact, he had the pleasure of traveling twice in the final global robotics competition held in USA, where he was ranked 15th. His interests do not stop there. Spyros has participated in UN’s first human rights stimulation and was the representative of “Faros tou Kosmou” at the National Reconstruction Center Meeting and the Ministry of Citizen Protection.

Born in Nikaia in 2003, Stavros-Rafael Giouvanis moves to the Dendropotamos area in 2012 and begins his first steps in Robotics with Faros tou Kosmou. Through their participation in the Robotics team, he is able to win at the Pan-Hellenic Robotic Competition the ticket to the world contest in Saint Louis, USA. In parallel, he is involved as the conductor of the music band of “Faros tou Kosmou”, broadening their horizons in the music field. Stavros was happy to take part in the UN’s first human rights simulation, and to represent Faros tou Kosmou at the National Reconstruction Center Meeting and the Ministry of Citizen Protection. Since the beginning of 2018, he has been a member of the rhetoric racing team for high school and lyceum students in Thessaloniki. This talk was given at a TEDx event using the TED conference format but independently organized by a local community.