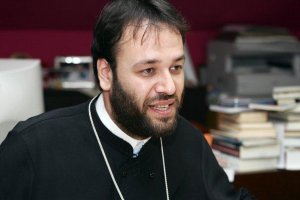 Theodore, Loukataris (his name before becoming a priest) was born in the Eptapyrgio of Thessaloniki on July 14, 1977. He completed his encyclopaedic studies and was admitted to the Higher Ecclesiastical School of Thessaloniki. After completing his military duties, as a reservist of armor, he was introduced to the theology department of the Aristotle University of Thessaloniki. In July 2001 he took the shape of the great angelic order, a deacon is ordained in November of the same year, while in March 2003 he is ordained an elder, followed in 2004 by Archimandrite’s reverend from the Honorable Metropolitan Neapoleos and Stavropoleos, Mr Dionysius I. In February 2005, with the instigation and blessing of Honorable Metropolitan Neapolis and Stavropoleos, Mr. Barnabas undertakes the establishment and operation of the ”Center for the protection of minors ROM ” and the ”Center for the reception of addicted young people” at Dendropotamos, Thessaloniki . He wrote a thesis entitled “The Orthodox Christian Element in the Sensitive Social Groups of the Roma” and received the Diploma of the Thessaloniki Ecclesiastical Academy. At the same time, he chairs the committees of the chapels, the General Police Headquarters, the Central Market, the Water Supply and Sewerage Company and the KTEL. Thessaloniki.